GET YOURS NOW
i

Some stories, some characters, some worlds have the unique ability to stay with us long after we turn the last pages. For many of my readers, the Forty Proof series is one such series. We relate to Bree, her friends, her struggles, her triumphs, and her mistakes. (I’m looking at you Alan!)   Seeing how Bree’s story has resonated has led me to seek tangible ways to bring Bree’s story to life in a way that would let readers own a piece of it.

Having her cards read connects Bree to her past, to her Gran, while guiding her toward a very special destiny. Now, you can own the very same hand-drawn cards that Bree does. Throughout the last two years I’ve worked closely with artist Melissa Stevens to create a timeless keepsake deck that you will treasure as you explore your own tarot journey.
But I’m not stopping there.
It didn’t seem right to create a Kickstarter for the Forty Proof series Tarot deck without giving you the option to own beautiful hardcover editions of the series itself. Whether you only want exclusive books that you can’t get anywhere else, or you are interested in custom designed merchandise celebrating the series, are a new fan or a longtime reader, I’ve created this Kickstarter with you in mind. 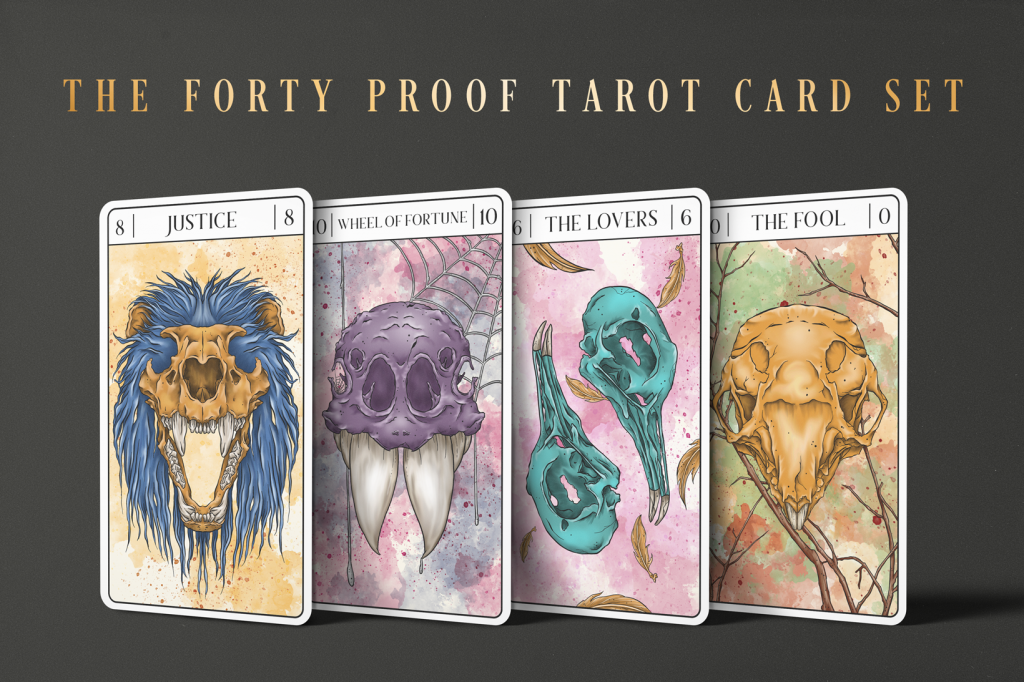 How long will the Kickstarter Campaign last?
One month. You’ll have all of April to back the campaign.
What if I miss Ordering? Am I out of luck?
Not necessarily, but maybe. I know that’s not helpful, sorry. There will be a very brief period after the campaign ends where you will be able to order the items you missed from the campaign from a special website that I will link to the campaign page, but it will only be up for a week or two. There has to be a cutoff so I know how much product to order.
When will I get my items?
My goal is for everything to be shipped by January of 2023. My hope is that you have it sooner.
What happens if the campaign isn’t funded? Do I lose my money?
No. If the campaign isn’t funded, your payment method won’t be charged. No money is taken until the campaign ends, on April 30th. However that also means that if the campaign isn’t funded, you don’t get your stuff. I don’t expect this to be a problem.
Which books will be available?
Midlife Bounty Hunter, Midlife Fairy Hunter, Midlife Demon Hunter, Midlife Ghost Hunter, Midlife Zombie Hunter, Midlife Witch Hunter… with the intention of adding the rest down the road after they are published.
Can I get only the tarot deck?
If that’s what you want. The campaign is very flexible. You can order one of something, or one of everything, or build a custom package using add-ons.
Can I get only one book?
Absolutely. You can order just Midlife Bounty Hunter, or, you can add individual titles on to any of the other reward levels.
Can I change my mind after I pledge?
Yes. You can change your mind until the campaign ends on April 30th. Additionally, you’ll be able to add extra rewards on after the campaign ends.
What benefits are there to me for backing early?
Backing early helps the project get more of a boost in the Kickstarter listings. They’ll push it to more site users, which means more backers, which means more stretch goals get unlocked, which means more upgrades for every single backer. But beyond that, for the first 100 confirmed backers to fill out a google form that I’ll be sending by newsletter, you’ll be able to request an art print of the Death tarot card featured in Midlife Bounty Hunter signed by me AND by Melissa Stevens, the artist.
Is the medallion in the Kickstarter the same medallion in the merch shop?
Yes
Will items from the Kickstarter be available in the merch shop later?
I don’t have an answer to this yet, but I can tell you that there will be at least one item that will never make an appearance in the merch shop: The Inner Circle tumbler. It’s 100% exclusive to Kickstarter. I also don’t anticipate the items from the mystery boxes making an appearance.
Who do I contact if I need to ask you a question about the Kickstarter?
Reach out to mayersmerch@gmail.com and my team will take care of you.
Why are you doing a Kickstarter instead of just putting them for sale in the merch shop?
Because Kickstarter allows me to judge the interest in the project before ordering inventory. If I ran it as a pre-order, I’d have to take everyone’s money at the time of sale, and then if we didn’t sell enough to meet the minimum, I’d have to do the print run anyway and be left with a lot of left over inventory. Also, it’s just fun. And it will let me reach an additional audience.
Why aren’t you offering eBooks or audiobooks as part of this campaign?
My exclusivity contract with Amazon prevents me from doing so.
Can I see a video of Shannon answering a lot of these questions live?
You bet.
How do I get a Kickstarter account?
Go to www.Kickstarter.com and click the “sign up” button. For most users it is in the top right corner.
Will any of these items sell out?
No! Every tier can accommodate unlimited backers. Which is a little terrifying, because of 20,000 of you want a tarot deck, we’re shipping 20,000 tarot decks. But wouldn’t that be a great problem to have? Being able to offer unlimited quantities is one of the biggest reasons we’re utilizing this platform.
Can I purchase these items if I’m in the U.K.?
Yes. However, shipping will be VERY expensive. We have to send it by courier so that it can be sent Duty Unpaid so that taxes and duties can be collected at the time of arrival. It will be much less costly for you to use a forwarding service such as Stackry.
What if I’m moving between now and when the items ship?
No worries! We’ll be contacting backers before shipping to validate and update shipping addresses.
Home  »  Home  »  Kickstarter: The Forty Proof Series Tarot and Special Edition Hardcovers

Where to Buy Shannon's Books